In Which We Write Our First Letters

Introducing some starring roles from these letters:

Grandad Fred – Mum’s Dad (he passed to spirit in July 1989, just after our wedding – I feel so lucky to have had both Grandparents there for our special day and to have shared a dance with my Grandad (the Anniversary Waltz) – he had been so ill, but at our wedding was absolutely full of life)

Aunt Peg – (never call her Aunt, she’ll get annoyed, but what a character!)

Some points to note: Mum and Dad had been looking at a property in Yorkshire with a view to moving there and opening a bed and breakfast, which had been a dream of theirs for a few years now.  I think us moving away spurred them on and subsequently, they were putting their house up for sale.

Mum actually started her letter the night we left their house, Thursday 8th February 1990, and starts by acknowledging the goodbye card I wrote to them.

It has just occurred to me that this is the first time Mum’s letters and my letters have met in person, as they were always in separate places.  For me, this is a wonderfully significant moment which is hard to explain but it filled my heart with such emotion – Mum and daughter back together again!

These letters are so short compared to later ones, but I suppose at the time, we were desperate for communication from each other, thus wanted to post them off as soon as possible! 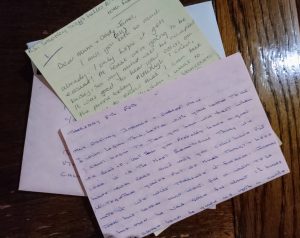 The first time our letters have met x

Our Darling Joanne and Dearest Vince,

I will begin this letter with your letter to us.  I can’t begin to tell you how we felt when we read it, but then you probably have a good idea.  It is the most beautiful thing we have ever read and only you could have put it together.  You’ve put so much thought and love into it; we will treasure it forever.

I was not looking forward to going to work, but Dad told me to be brave, I could not look at my watch all morning.  Pat took me for a drink after work – cheered me up a little.  James is going to Dean’s for the weekend, so that will be good for both of them.  When Dad came back from work, we had a nice long talk about your lovely new life.  Dad’s got a lovely way of making everything sound alright.

Went to Dartford, very boring without you to shop with. Saw Aunt Peg and had a long chat with her.  She is very pleased with the fridge/freezer you donated to her and thinks she’s very posh now.  Dad’s working all weekend, so when I came home from Dartford, I felt very lazy, so watched TV all afternoon till he came home.  We were just washing up from tea when the phone rang, Dad said it might be Joanne and Vince.  My heart jumped.  It was wonderful to hear your voice, you were so clear, it seemed you were not that far away from us, a sort of sad but happy feeling.  Was so pleased that Smokey was alright, bless his heart.  Watched Dave Allen on TV later and he made us laugh, wish he was on every night!

Boring Sunday again.  Just cleaned brass on front door and now it is raining hard!  Used my new vacuum cleaner this morning, the suction was so strong, it picked up the tiles in the back hall.  I rang Nan.  She said she is alright just gets a bit sad when she thinks of both of you.  Dad had just had a funny turn as he can’t finish his crossword ha ha ha!

This is going to be a busy week for you both, getting things sorted out.  Vince might even be starting work this morning.  How big a breakfast is he eating?  Is Smokey eating alright?  What sort of cat food is it?  Hope it’s not bear meat!  Felt a bit better at work today but have to turn the radio off when something sad comes on.  Did a crown prep on the boss Mr Torry today and Angie kept making silly faces at me round the door to make me laugh, but I kept my cool.  Went to see Nan with Dad this afternoon, we told her that you rang on Saturday and she said, ‘where is she now then?’ We are keeping up your good work, we went to the bottle bank and Dad had a smashing time!  Watched a Survival Special on TV this evening about Scarlet Salmon breeding grounds in British Columbia.

Went to see Rhona and Ted this afternoon.  Told Rhona you had been trying to ring her before you left for Canada.  She said that was very sweet of you to think of her and to give you both her love.   Mrs. Hilary, from Briar Dene, rang this evening and said she had not forgotten about us and would like us to have the Yorkshire cottage.  She said it’s snowing there now, and it looks very pretty.  She also said she has told everyone that I would like to contribute to the craft fair.  I thought ‘oh gawd’!

I had the day off work today because it is Valentine’s Day and Dad took me to Rye for lunch, but we walked first from the harbour right to the end of the bird sanctuary and it was raining.   But we had our waterproofs on, so we quite enjoyed it.  Apart from our noses dripping, getting wet and cold on valentine’s day, that’s what I call true love.  Some bad news on TV tonight, interest rates to go up by 1%, so that’s going to make selling even harder, we can’t win, can we?  A little message from Dad now:

Hi Jo, who sent me a Valentine card, does Vince know?  It was a very nice surprise, good job you didn’t disguise your writing or Mum would be on my ear-hole saying, ‘who’s this other woman sending you a card?’  I had to buy a pound of homemade fudge in Rye to keep all the girls at the dentist quiet for taking Mum out for the day.  Good job Vince wasn’t here, he would probably have eaten half of it Haha!

One whole week gone by since we said goodbye.  It’s gone so fast.  Christmas is going to come very quick at this rate.  Good.  Went to see Aunt Peg today, she was pleased to see us.  Showed her the letter you gave to us, she said how beautiful it was.  I love showing it to certain people, because we are very proud of it.  She also said not to worry about you because you will both do well.  It was so good to hear your voice again Wednesday night and know everything is going well.  Can’t wait for your first letter to explain it all in detail. 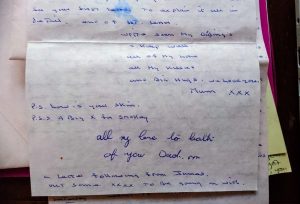 I miss you both (all) so much already.  I only hope it gets easier!  At least we’re going to be busy, so my mind will be occupied.  It was good to hear your voices on the phone today.  Although I cried, it’s nice to know that I can talk to you that easily when I want to.  It is exciting to see Vancouver again though.  The air is so fresh, and it’s been snowing, so everything looks really pretty.  I will take some pictures before the snow melts and send them to you.  I’ll also send you a photo of The Woolstones, so you know what they all look like.  The flight over on Wardair was very impressive.  We had china plates and proper cutlery and a lovely meal.  We had a mixed salad to start and then I had chicken Florentine and Vince had steak and then they bring round a sweet trolley, just like in a restaurant!  The film was Turner and Hooch, which was quite funny, and all on a proper TV screen with decent headphones!  When we arrived, everyone here was really pleased to see us.  Smokey is settling in well.  We are sleeping in the basement and there is a really big area for him to wander around in.  Today, Heather and George [Woolstone] drove us around to look at some open houses.  They were very impressive, but a bit beyond our price range.  We had lunch in Deep Cove (remember us telling you about it?).  They keep us well fed here and it’s warm.  We help ourselves to breakfast and lunch, they have one of those large American fridges which is filled to the brim with absolutely everything! 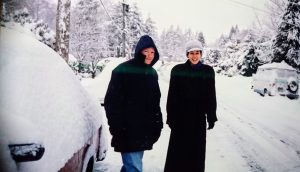 Vince and Carolynn in the snow!!! Plymouth Drive, North Vancouver 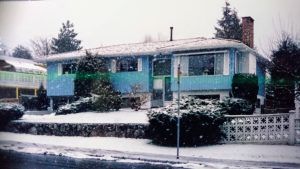 Our first Canadian home (the basement of The Woolstones’ house)

Today was probably the longest Sunday I can remember.  The time seems to go much more slowly here.  Because they have English guests, Heather and George decided to do a proper roast dinner, but can you believe it, they don’t know how to make roast potatoes.  So, I cooked them, and I think they were impressed!  Vince and I went out for a couple walks today and looked at some more open houses, they’re still a bit above our price range, but they were so wonderful.  I think we’ll have to move a little bit further out to start with, but that should be okay. 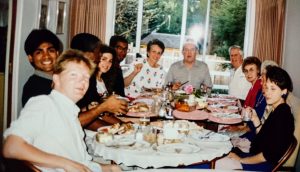 A typical dinner at The Woolstones, lots of friends!!

Went to open a bank account, they gave us cheques, cheque card and cash card number on the spot.  It was amazing.  We also applied for our social insurance number so we can now look for jobs.  We had a quick look in the job centre today but saw nothing much.  Vince called the refrigeration engineer that Heather had found who was very helpful and will contact Vince in a few days.  Went to Lonsdale Quay and to Vancouver City Centre today which was fun.  It seems strange to see it again, but on the other hand it seemed perfectly normal.  The mountains looked lovely today.  It snowed in the night a little bit, so they have white peaks and you can even see the ski run clearly on Grouse Mountain. On the way back on the bus, there were lots of people with skis who had just been skiing for the day (can you believe that?!)

Went into Lonsdale (Lower North Vancouver) to Rent-A-Wreck, a car-hire company that hires older cars, so it’s cheaper!  But they wouldn’t let us rent one until we have a credit card for a deposit!  Never mind – the weatherman says there’s more snow on the way, so maybe it’s just as well.  Tonight, we’re going to look at someone’s basement with a view to us renting it.  It’s self-contained, furnished and it’s in a good position.  The people are friends of Heather and George, so we’ll probably get it at a good price.  In any event, we’re welcome to stay where we are for a couple of weeks.

Well, I had better save some news for the next letter although I want to just keep writing as it makes me feel so close to you all.

Well, I hope our first correspondences have piqued your interest and that you will enjoy reading future letters/blogs.  Until next time …