In Which We Leave The Country

We were booked to fly to Vancouver on 9th February, which was a Friday.  The previous day our bungalow in Swanley had been packed up by an overseas removal company and our belongings disappeared into boxes and packaging before our very eyes.  It was all so surreal.  The guys who were doing the packing stopped for so many tea breaks, I thought it would never get done, but they were obviously good at their job and indeed the packing was completed to schedule. It was funny really, one of them would say “well, I think it’s time for another cup of tea, Jo”!!  They saved space by stacking chairs, one upside down on top of the other, then using the space between the legs to stack boxes, a trick that we used in later years when moving ourselves.  I kept asking them to please be careful with this ornament, those glasses etc., but as far as I can remember, everything arrived at the other end in one piece. 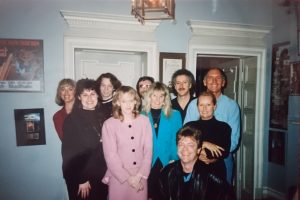 I’d left my job, working in a music management company two weeks before departure for Vancouver (see photo of work friends from Trinifold, including my old boss, Bill Curbishley, Manager of The Who, just one of the artists/bands he looked after then). The days and hours that followed thereafter, were filled with visits to family and friends or people popping in to give us cards and gifts.  We had so many meals out and a continuous flow of people round for drinks. We rose early in the morning and never went to bed before midnight.  It was a whirlwind of emotions. There were many tearful goodbyes. I think we actually saw everyone we knew; no-one was left out.  I remember my best friend, Karen, who lived just a couple of roads away, coming round to give me a beautiful gold bracelet on the day our bungalow was being packed away.  I wore this with love on my travels.

I remember silly things like wearing the same pair of earrings every day because all my others were packed, and that the backs kept stabbing me every time someone hugged me. I had permanent red marks on my neck for a long time! Things like the stress of having to book our cat, Smokey, onto the same flight as us, and how he needed to have a special carrier box, with certain dimensions plus the correct health and travel documents for the journey. 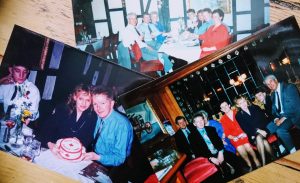 A few days before departure, Mum and Dad took us for a beautiful meal at the Victoria and Bull Hotel in Dartford, ironically a place that we had never been to, even though it was on our doorstep, but it was posh and they wanted to take us somewhere special.  It was just close family, Mum, Dad, my brother James, Vince’s Mum Cynthia and her partner, George.  I cannot remember for the life of me what I had to eat that night.  I do remember that the restaurant made us a wonderful cake with red and white icing and the Canadian flag.  They also presented us with a Canadian one dollar bill for luck.  It still sits on our fridge today.I have always meant to get it framed!  Maybe now is the time to actually do that.

Our Canadian Dollar Bill from Bull and Victoria Restaurant

I didn’t want to stay at Mum and Dad’s house the night before departure because saying farewell was going to be hard enough as it was. I left a card with them, saying thank you for absolutely everything in my whole life, and told them not to read it until I had gone.  Because the card had a little bunch of flowers on the front, I sprayed it with my perfume.  All these years, it has been kept in a glass display cabinet, until recently, when Dad brought it down for me.  Can you believe it, it still smells of perfume!  It is so hard to describe the feelings of saying goodbye and at this point, we did not know how long it would be until we saw each other again.  Mum and I were a mess, but we managed to laugh at ourselves through the tears.  These photos are precious, but not pretty!!  A lot of red eyes and sad faces.  Finally, as it came time to leave (prolonging it was making it worse), my Dad, bless him said to me “Go on, bugger off!” which made us all laugh.  As we drove away, I looked back and my Mum was at the end of the garden path, waving and waving until we were out of sight.  My heart broke. 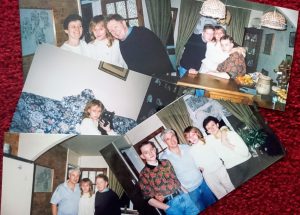 We spent our last night in England at Cynthia’s (Vince’s Mum) house. We let Smokey out so he could have a sniff around and some freedom before his flight.  That night, he howled and howled, and we didn’t sleep at all.  He was echoing our stress and upset I think, and bless him, he didn’t know what was going on.  Once again, there was an emotional goodbye with Cynthia.  Vince is the youngest of six of her children.

We did not want family to take us to the airport as it would be far too difficult, and I may not have ever walked through the departure gate!  And so, early on the day of departure, our friends Ron and Chris, picked us up and came with us to the airport.  We thought this was a better plan as it wouldn’t be so upsetting (we were wrong, ha ha).

We checked Smokey Cat in and said goodbye to him while he was howling.  We felt so bad and so helpless; how could we explain to him that we would meet him at the other end and that he was going to be fine?  He would be on the same flight as us, but in the hold section of the plane.  We had a full English breakfast and coffee with Ron and Chris and for a while everything seemed normal, like we were just going on holiday.  However, when we came to say goodbye to them, they both cried just as hard as we did!  Their daughter and family had moved to Vancouver some years previously, so I suppose it brought back memories for them.  We hadn’t thought of that!!

When the plane took off, it really hit me, THIS IS IT!!  New adventure, new life … it’s really happening.  The flight had a stopover in Calgary; however, we were delayed because the weather conditions there were heavy snow, being so close to the Rocky Mountains.  I kept thinking about Smokey in the hold: was it cold down there, was he OK? At least once we took off it was only an hour to Vancouver.

We collected Smokey and it seemed to take an eternity for him to be brought out to us.  When he finally came through, the poor cat was frantic, his eyes were wild – he wasn’t even responding to our voices.  His poor little nose was rubbed dry from him trying to see through the wires of the box and he had not been given any water.  Poor baby.

We had a friend, Carolynn, who we’d met when we holidayed in Vancouver a couple of years earlier, and who we’d kept in touch with. She kindly came to meet us, and we were going to stay in her family’s basement. It was a real comfort to know that Carolynn and her family were there for us, and that we could stay until we found somewhere permanent to live.  The basement was warm and comfortable, I remember thinking that it was exactly like all the basements you see in American movies, complete with wood-panelled walls, old brown sofas and a TV.  Smokey Cat was soon exploring his new space and quickly settled in, which was a huge relief I can tell you.  At the time, he was our baby and we treated him as such! 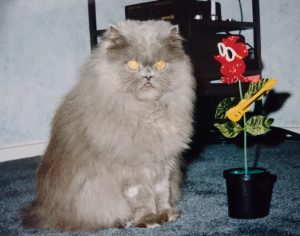 Smokey before leaving with his dancing flower. He loved that thing!

On the night of arrival, we rang Mum and Dad.   It was exceedingly wonderful to hear their voices and they sounded so close.  We kept the call to about 10 minutes as we really weren’t sure how much long distance calls cost at the time.  Again, I cried even more tears on hanging up the phone, but at least they knew we had arrived safely.

The following day, the letter-writing and the adventures began …