In Which Mum takes a Honey Bee for a Ride

Pat and Mick (Pat is Mum’s work friend and her husband, Mick)

Angie (also a work colleague and a chatterbox)

Sheila and Pete (Dad’s cousin Sheila and he husband Pete aka P.J. from P.J. and Rose)

Nanny Maisie (My Dad’s Mum, who sadly died when I was 3 years old)

Great Nan (Alice) – Maisie’s Mum.  A beautiful twinkly-eyed lady who passed away when I was about 15)

It’s  so hard to start a letter.  It’s the most difficult part of letter writing!  Anyway, here we go again.  Went shopping on my own on Saturday because deep down I know Dad doesn’t like coming.  It was a beautiful day and Tommy Tortoise really enjoyed having a good feed up.  I could hardly wait for Saturday night, I get so excited when it’s time to ring you and very emotional.  God, what would we do without the telephone?  We are very pleased about your car.  I can just imagine you driving about in that – Dad and James said you are both Canadian Yuppies, but I think Dad is a bit jealous!!  What colour is it?  It sounds red to me.

Went and picked Nanny up before dinner today and took her to the Chatham Crematorium to put a plant by Grandad’s plaque.  She kept saying no-one had taken her to see it yet.  We told her that we had taken her down before Christmas and said ‘don’t you remember that Joanne came with us?’ but she insisted that she had not seen it.  Poor Nan.  Anyway, I gave Grandad your love and told him you and Vince are doing very well and that you are both happy.  It was so warm, I was walking around in short sleeves.  We will probably have snow at Easter, because this weather is too good to last!!!

A very Happy Belated Birthday to you.  Wish we could have been there to give you hugs and kisses, but am sure Vince did that anyway.  Hope you liked your pressies, it’s hard trying to pick something when you are not with us.  Hope you had lots and lots of cards, sorry we missed you when we rang, but was nice to hear Vince’s voice.  Hope you did well with the interview, you had to leave very early.  I was going to ring about 3 o’clock our time, but thought you would still be in bed!  Are you going to go somewhere nice for dinner?  Hope you do, we will be thinking of you.  Now that you have a car, can you drive it yet or have you got to pass your new test first?  Hope it’s nice and easy.  What I want to know is: how are you going to get us all in a two-seater car when you pick us up from the airport? Ha ha.

Just got out of bed when the phone rang and James said ‘it’s Jo’.  What a wonderful start to the day.  Really pleased you had a lovely birthday and liked your presents.  Tried to find the restaurant you went to for your birthday, but can’t see it in the booklet.  You will have to tell me what you had to eat and what other presents you had and how many cards.  We were hoping we never had to say this, but we have had bad news.  We have lost Briar Dene, the house in Yorkshire.  Mrs. Hilary rang and said how sorry she was.  Well you can imagine how we felt, apparently this couple came to see it, liked it and bought it, just like that.  I have very mixed feelings: I feel so sad and I feel angry that there is nothing to look forward to.  I loved that cottage so much and I felt it was ours.  I think there is definitely somebody up above who does not want us to move.  Maybe it’s Grandad and he wants us to stay because of Nanny. I prayed every night for Briar Dene – now that you and Vince have gone, I don’t want to stay here.  I think if it was not for leaving Dean and Nanny here, we would be with you tomorrow.  You definitely both did the right thing by going to Canada.  Poor old Dad, it’s 10.30 pm and he has been out in the garage mending his bike since he came home.  He’s got it in bits, think he will be out there till midnight.  Think I better take him a coffee out.

Not a very nice day today, raining on and off.  Went to pub with Pat and Mick today. You know I told you Mick’s Dad died?  Well Pat and Mick have been round to his Dad’s house sorting it all out – we had such a laugh talking about all the old photos of Mick when he was a boy.  Vince would have had a good laugh too.  Angie had a bit of a bang in her car and has now got a collar round her neck because she jarred it badly.  Hoping it might keep her quiet for a while HAHA. Not much happened on Dallas tonight, well not enough to tell you about.  Dad’s been out working on his bike again tonight, but just came in and thinks he’s mended it.  He won’t know until the morning when he uses it for work.  Hope it will be OK, otherwise I will have to get up at 5 am to take him.

This afternoon, went up to see Nanny – it was quite hard going to make conversation with her today.  She said she’s sent you a second letter, but I don’t know whether she has or not, you’ll have to let me know.  On the way home, took the car through the car wash, it was so dirty.  It rained the other day and brought down this fine dust with it and the car looked disgusting.  Think I’ll tell Dad I cleaned it and he will think how good I am (nasty me HAHA). I have just watched Neighbours, it was so good – they have just celebrated Christmas, it was lovely and made me a bit tearful because I was thinking how wonderful this coming Christmas is going to be and it’s getting closer all the time.

Today is the end of two lovely weeks of working without Old Face Ache – wish he would retire and let us run the practice, it runs better without him and it’s a happy place to be.  When he’s there, it’s so ‘proper-like’ because he is such a pompous and boring old bugger. Went to Sainsbury’s shopping straight from work.  Some stupid kid, sitting in the trolley at the cash register and stuffing his face, was sick all over the floor and as it hit the floor, it splashed all up my legs.  Oh God, I felt sick myself!  Had to shower when I got home.  James was late home from school today, he had detention!  He would not say why (of course it was not his fault?!!).  I have just come back from posting off your Easter pressies – hope you like them.  I know Vince will. Do they have Easter eggs in the shops there?

Raining today.  Postman just delivered a nice little letter from Smokey Cat.  Did you know he sent it?  He’s got so clever since he has been living in Canada.  He has even put his paw mark on it, bless his heart.  Please give him a kiss from us.  Went shopping on my own again today.  Dad’s working till 5pm.  When I had finished shopping and went back to the car, there was one of my bees sitting on the back shelf.  She must have flown in yesterday when I was unloading my big shop.  Anyway, when I got home, I took her out and put her back near the hive.  She seemed OK – hope she doesn’t tell them all about the trip, I may have a car full next time!  Had a nice relaxing afternoon with my knitting – watched an old black and white film (Anne of Green Gables) I do love the old films.  Oh I forgot to say Nanny rang this morning, she was crying on the phone because she was so happy she’d just had a letter from you.  She said she was going to take it to Bingo with her to show everyone the photos.  I think it makes her feel proud to have letters from Canada and keeps her happy as well.  Went to Sheila and Pete’s tonight for dinner and two more friends of theirs, who used to live in Joydens Wood, but now live in Hextable, were there too.  It was a really good evening, we enjoyed ourselves very much.  Got home late and the clocks had to go on one hour, so not much sleep tonight.

Quite tired this morning after a short night and poor Dad must be very tired as he had to get up and to go work.  Opened your Mother’s Day card whilst eating my breakfast, such a beautiful card, thank you both with all my heart, the words were so lovely.  Yours was the only one I got, did not expect one from Dean and did not get one from James, he would rather spend his money on food!  I took Nanny a nice plant up in a pretty pot, she seemed pleased.  From there I went to Streatham Crematorium to take a plant for Nanny Maisie and a plant for Great Nan.  Gave them both your love, I also took some photos as thought you might like to keep one.  Will send them with next letter.  On the way home, I drove along the bit of road where you suddenly said to me “Mum, Vince and I are thinking of emigrating to Canada”.  Remember?  I’ll always remember it so well, but I never thought it would happen!  Well there was such a lot of blimin traffic.  Took me ages to get there and ages to get home – I expect everyone on the road was travelling to see their Mums and Nans.  So nice to hear your voice when you rang and am so pleased you are both set up now.  Your job should be interesting, might even see you on Canadian TV – it will be nice to tell people when they ask “What is Joanne doing now?” and I can say “Oh she’s working for a TV station in Canada”.  I bet Vince is pleased with himself now that he is working, you have both done extremely well and we are very proud of you.

We have just watched Karate Kid 3 – was not as good as the other two, he has put on quite a lot of weight, but I still like Mr. Myogi, he’s very cute.  There was one film on the trailers called “The Bear” it looked very good, but it might be a bit sad.  Don’t think we, or you, had better watch it.

Old Face Ache was back today, he’s not very suntanned (“we did an awful lot of sight-seeing you know, Mrs. Figg”).  I said in answer – “Oh really Mr. Torry, how nice!”.  We were all trying to keep out of his way, he even had to make his own coffee, he probably wishes he was still on holiday.

Well, Dad’s just off to work now (nights) so I will close.  More news to follow soon. 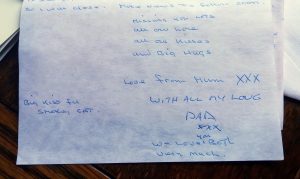